There are, in Portugal, eight medical schools (Braga, 2 in Porto, Coimbra, Covilhã, 2 in Lisbon and Algarve – those in the Autonomous Regions do not have the capacity for training throughout the entire study cycle), which together form more than 1800 masters in Medicine, annually. In less than 20 years, with the emergence of new medical schools in Braga and Covilhã (2001) and with the increase in openings in general competitions and special access competitions, this number more than tripled, and in 2010 they were just under 1500. One of the biggest leaps in pre-graduate training took place in 2007, with the creation of the Special Contingent for Graduates – which was expanded in 2011 – making up today around 15% of all places in Medical Schools. However, postgraduate medical training has failed to keep up with the stoppage – soon we will analyze the causes for this discrepancy.

Before, I would like to leave a brief summary of the functioning of a medical training entirely done within the national system, which, unlike the vast majority of countries in Europe, and the world, is totally public.

As with training in Medical Schools, both the "Common Year" (General Training Internship) and specialized training are provided only in Health Centers and Hospitals under the supervision of the Ministry of Health.

The number of places for entry to Medical Schools is defined by each university, in coordination with the Ministry of Higher Education, while the number of places for specialized training is defined by the Ministry of Health, after hearing with the Medical Association, which communicates with hospital services to assess training capacity and the fulfillment of pre-defined quality criteria (the famous “Suitability Criteria”).

Since 2015, there has been a serious problem in the medical training system in Portugal and it was easily anticipated more than 20 years ago: postgraduate training capacity is unable to absorb all recently graduated students. This deficit was around 150 students in 2015, but reached almost 600 in 2019 – a problem that is accelerating sharply. 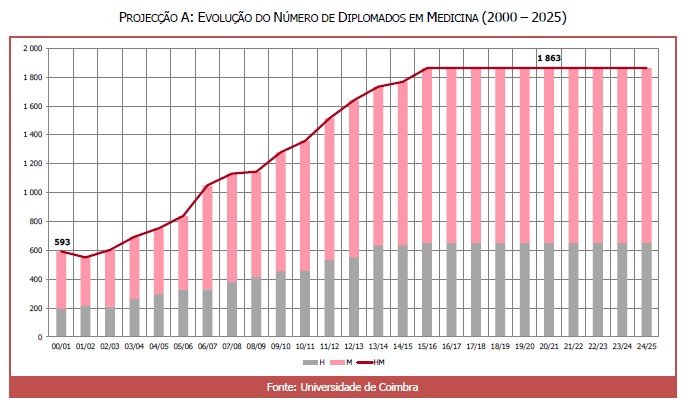 At this moment, even the most knowledgeable reader of medical training in Portugal can comfortably follow the invitation to the following discussion – which leaves out the discussion on the reformulation of the National Access Test and the possible alteration of the General Training precepts and competitions for specialized training.

Assuming that there is a common interest in solving the problem of excess medical students, and the recent advent of an army of undifferentiated physicians while specialist doctors are lacking all over the country.

It is unwise to train brilliant students who are highly valued throughout Europe as highly qualified and of the best health workers – as is also the case with nursing – who are forced to choose between a life without a promising future or emigration. We cannot condemn them for their choice. After all, how many mothers and fathers don't want the best possible life for their children?

So, how to rebalance the balance?

(36544)
$11.95
【3 Charging modes Available for Different Phones】7.5W charging mode is for iPhone 11/11 Pro/11 Pro Max/XS MAX/XS/XR/X/8/8 plus with latest iOS System;... read more
(as of July 13, 2020 - More infoProduct prices and availability are accurate as of the date/time indicated and are subject to change. Any price and availability information displayed on [relevant Amazon Site(s), as applicable] at the time of purchase will apply to the purchase of this product.)

There are several possible solutions, which will please some more than others depending on their political affinities, ideological precepts, or common sense. Each has strengths and weaknesses, higher or lower costs or logistical complexity and different degrees of opposition to the status quo.

This will be the most attractive hypothesis for staunch supporters of a totally public health system, and who are vehemently opposed to the mere possibility of A3ES giving a positive endorsement to the opening of a private Medical School. It is, however, the one that (in my view) offers the least real probability of solving the underlying problem and allowing long-term stability.

Right from the start, it implies a reversal of the cuts, under the euphemistic synonym of captivations, which have been accelerated since 2015, and an increase in funding that will be greater today than would be necessary in the absence of this chronic under-budgeting. It would be necessary, first of all, to stop the departure of professionals from the National Health Service to units in the private and social sectors, in order to keep the training capacity stable – without specialist doctors in the staff of public hospitals, there is no capacity for training new ones. experts.

To this end, it would be imperative to review the salary scales, making them as close as possible to the attractiveness of those in the sectors competing with the State, as well as providing hospitals with sufficient and necessary technical and material resources for the practice of Medicine according to legisl artis. The problem is that this approach would bring costs to the State, which, a priori, we know we are unable to comply with, as has been demonstrated in recent years, and the results – if the reform were successful – would only show effects several years after its full implementation. .

Despite being a proposal that at first glance seems appealing and of the most elementary common sense to many, it is important to remember that the easiest and most pleasant ideas are hardly the best, and rarely the correct ones. The Pact of Permanence, defended by Marta Temido in 2019 as one of the options under study, would be nothing more than a “Pact of Decay”, leaving young doctors with a false choice: accepting a 3–5 year bond with the State after training under the working and remuneration conditions defined by him, or giving up specialized training altogether – in the end, giving up a life project that has consumed 6 of his green years.

(241)
$17.99 (as of July 13, 2020 - More infoProduct prices and availability are accurate as of the date/time indicated and are subject to change. Any price and availability information displayed on [relevant Amazon Site(s), as applicable] at the time of purchase will apply to the purchase of this product.)

It is a false solution, as it does not create more specialized vacancies, does not reduce the number of candidates and, therefore, does not improve either medical training or the final provision of care to the user. On the contrary: it would increase the frustration in health professionals, maintaining stress on the system and creating a fertile ground for medical error and the expansion of access deficits.

“Doctors (including those working in the public sector) have as many rights as other citizens. After tying users to the waiting lines, the Government now intends to tie doctors to the public service ”wrote João Cotrim de Figueiredo, IL's only deputy in November 2019. It would be unthinkable to compel journalists, lawyers, pharmacists, engineers and so many other professions to work obligatorily for the State; why does this seem to be only acceptable and desirable with doctors? Why does everyone seem to have an intrinsic right to be free to choose how, where and when to practice their profession, but that freedom is amputated to the medical profession?

This can be achieved, either by reducing the number of Medical Schools – something that would never be accepted by any of them -, by reducing the number of places in the General Access Competition or by reducing / extinguishing exceptional Competitions, such as for Graduates. Although it may not be a popular measure, and which has been outright rejected by the current Minister of Higher Education, the extraordinary systems correspond to about 15% of the total vacancies in the higher education system, so the final impact would be equivalent to the closure of one of the Medical Schools. It remains here to decide whether programs for special access to students with previous degrees are more beneficial (for themselves, and for medical training) and the adjustment should be made in the General Access Contest, or if the extinction of these ancillary programs should be considered . But, again, it is a false solution.

So, having put the 4 previous proposals, which are the most debated in the middle, the one that will be for me the only true one holistic solution – rethink …

In defense of human rights or...

The danger of dry thunderstorms that...

Earthquake with a magnitude of 3.0...